I have written a number of times about Australia’s multi-billion dollar broadband boondoggle, more formally known as the National Broadband Network (NBN).

NBN was established in 2009 to design, build and operate a wholesale broadband access network for Australia. To date, the government of Australia has poured more than AU$50B into the project (approximately C$45B), including nearly AU$20B in government debt that is supposed to be replaced by private debt by 2024.

Last week, we learned that the Australian government is pouring another AU$2.4B into the company over the next 4 years, to enable another 1.5M homes and businesses to have access to fibre to the node (FTTN). According to Light Reading, “That includes 660,000 premises in rural Australia and means around 10 million homes and businesses across Australia will have access to top download speeds of around 1 Gbit/s by late 2025”.

There was an interesting data point in the Light Reading story:

More than 8.5 million Australian homes and businesses were connected to the NBN at 30 June 2022, with another 3.6 million ready to connect.

However, just 18% of NBN customers were on wholesale plans offering download speeds of 100 Mbit/s or above.

How does that compare to Canada, where networks are competitively built, owned, operated and financed, by the private sector, without structural separation?

According to the latest figures from the CRTC, of 12.2M broadband connections in Canada, 7M have speeds of 100 Mbps or higher (57%), which is more than 3 times the proportion in Australia. 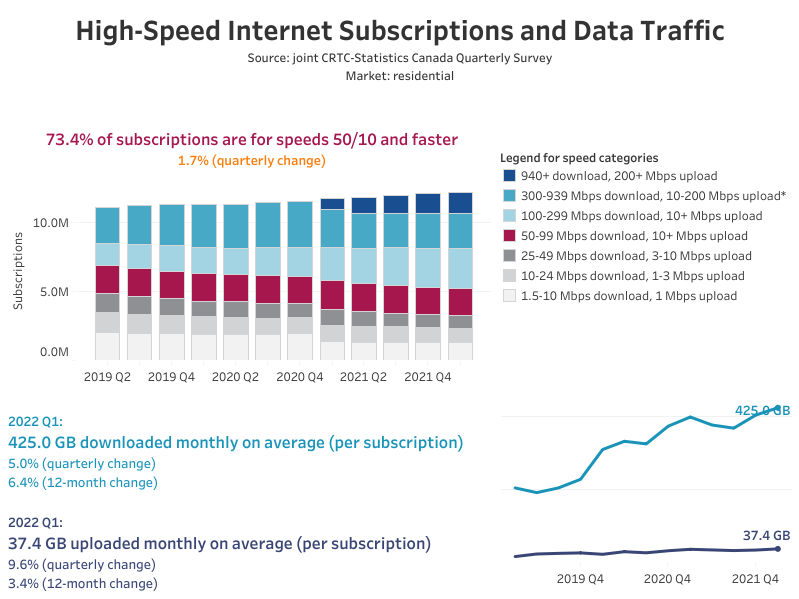