To maximize media coverage, the CRTC is trickling pieces of its 2015 Communications Monitoring Report. I think it may be a sneaky way of getting the public to help do proof-reading and submit corrections.

Little slips have made the communications strategy obvious. On October 22, the CRTC Twitter account let slip a little factoid that wasn’t actually published in the excerpt published last week:

Two-thirds of Canadians have a smartphone says #CRTC report https://t.co/vPycuYhSHG … 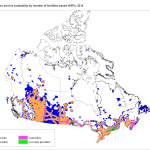 That figure didn’t actually show up until today in Figure 5.5.8.

In the excerpt of the report released earlier today, the CRTC refers to a mysterious Appendix 9. There is no Appendix 9 in the report. There are no appendices at all. Perhaps they will show up in the next release.

When the Commission finishes teasing us with partial releases, we’ll hopefully see a complete final edition, in the customary full html and pdf formats.

In the meantime, we’re detecting some gaps in the analysis, with a couple glaring errors. Maybe the strategy is to get us to help do the proof-reading.

Map 5.5.1 purports to show “Wireless service availability by number of facilities-based WSPs, 2014”. Now, “WSPs” is a defined term in the report: Wireless service providers. Table 5.5.15 purports to show “Number of different wireless networks, expressed as a percentage of population covered, by province and territory, 2014” and it includes a note that says “In many provinces, facilities-based wireless service providers who own spectrum share the same radio access facilities to offer telecommunications services to the public.”

It appears that Map 5.5.1 is trying to show, in map form, the information that is contained in Table 5.5.15, that is, the number of wireless networks.

It certainly does not reflect the number of facilities based wireless service providers.

A more glaring set of errors can be found in Section 5.3, looking at broadband internet services. In the overview comments in that section, the CRTC confuses coverage with capacity: “While rural Canadians have access to services provided by satellite, capacity limitations restrict practical availability to approximately 1.5% of Canadian households.” No other service is treated that way.

This has a significant impact on Figure 5.3.15, “Broadband, 5 Mbps availability (percentage of households), 2014”. The Commission fails to include satellite in the chart, saying “Satellite service is excluded; however, it would add approximately 1.5% to the availability of 5 Mbps broadband services.” That is a flawed statement, based on the capacity consideration. No other technology is listed showing capacity – they show coverage.

Huh? So we have a table that could end up showing a higher level of subscriptions than availability? How does that make sense?

Maybe the CRTC is trying to crowd-source the editing of this year’s Communications Monitoring Report. The new Minister isn’t being named until next week, November 4.

If you want to help the CRTC get the final report right, add your corrections to this blog post by submitting a comment.

[Update: October 29, 2015] The CRTC has issued the full report [html version or download 10 MB pdf]. The report still refers to the Atlantic provinces as the Maritimes (refer to Canada’s Constitution to understand the difference).

The CRTC invites suggestions from the public to improve the report: “Interested parties are welcome to provide comments for improvements or additions to future editions of the report. You can send your comments to the attention of the Secretary General, CRTC, Ottawa, K1A 0N2.”

Perhaps the CRTC can also consider including an email address in the next edition.