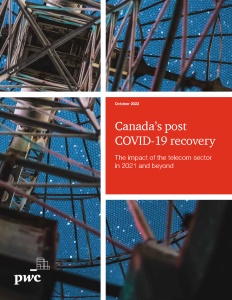 In releasing the PwC report, “Canada’s post COVID-19 recovery: The impact of the telecom sector in 2021 and beyond”, CWTA President and CEO Robert Ghiz said,

Canada’s telecommunications sector has played a crucial role in maintaining economic and social activity since the beginning of the pandemic, and by investing in critical network infrastructure at levels that exceed that of international peers, the telecom sector will be a key contributor to Canada’s post-COVID economic recovery. These investments are vital to maintaining Canada’s status as a world leader in telecommunications and meeting Canada’s innovation and economic growth objectives.

The report shows that capital intensity in the Canadian telecom sector represents 19% of revenues, significantly higher than the 14% average level of investment found in peer economies in the G7 plus Australia.

CWTA indicates those investments are delivering positive outcomes for Canadians:

The telecom sector plays a significant role in Canada’s economy contributing almost $75 billion in GDP output and supporting over 650K jobs in 2021. The sector played a critical part of the economic and social recovery post COVID-19, supporting economic growth as well as underpinning Canada’s innovation ecosystem. Looking forward, the Canadian telecom sector will continue to contribute significantly to Canadian GDP and jobs, as well as impact revenues across industries—notably through the deployment of 5G.

The telecom sector’s ongoing investments in critical network infrastructure, including 5G and spectrum will provide increased coverage, high-quality networks across Canada and support the growth of the digital economy. The Canadian telecom sector has an important role to play in the advancement of technology, notably supporting the deployment of climate technology that is required for Canada to meet future sustainability targets, such as the 2030 UN Sustainable Development Goals.

The telecom sector continues to contribute to prosperity and innovation in Canada, connecting Canadians across the country through provision of high-quality wireline and wireless networks.

The report reaffirms the importance of continued long-term investment by the telecom sector, consistent with the government’s policy that Canada’s future depends on connectivity.