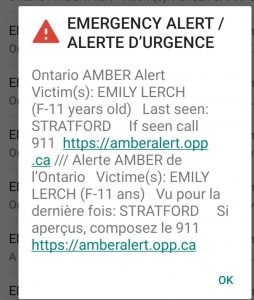 Enough is enough. Once again, we experienced another case of Canadian police forces’ use of the national public alert system.

At 5:58pm Tuesday evening, I received another useless Amber Alert on my phone.

As described by the AlertReady website, some government issuer (in this instance, the Ontario Provincial Police), crafted a message to tell the public that an 11-year old girl was last seen in Stratford and we are to dial 911 or go to amberalert.opp.ca.

Why did the Amber Alert message contain so little descriptive information, when clearly, so much more useful information was available?

Thankfully, Stratford Police issued a tweet at 6:26 pm identifying that the girl had been found, safe, apparently in York Region, around 100 miles away.

That explains why the OPP website from the Amber Alert was displaying a banner with “NO ACTIVE ALERTS” when I visited the site around 7:00pm. As I write this, the OPP has not yet cancelled the Amber Alert.

There are clear responsibilities for the issuer of a public alert:

That York Regional Police were involved in the rescue demonstrates the value of casting a wide net for the geographical coverage of the alert, but we should not accept the lengthy delay between the local police force’s appeal to the public over social media and the OPP issuing an official alert. Above all, the lack of useful descriptive information in the Amber Alert is inexcusable.

For more than 3 years, I have been calling for “formal process to review each use of the National Public Alert System, to help develop best practices”

The AlertReady system is a powerful tool in the hands of Canada’s public safety officials. As I have written before, I don’t question that the system was deployed in this instance. Shouldn’t we continually be examining how the system was deployed, to ensure that it will always be used in the best possible manner?

In April, I described a review of the US system being undertaken by the FCC. I would prefer to see leadership of such a review by Public Safety officials, but it is clear that multiple agencies and multiple levels of government should take interest.

As I have said repeatedly, shouldn’t we continually be examining how the NPAS system is being deployed, to ensure that it will always be used in the best possible manner?

With continued failures in the way imminent threats are being communicated to the public, the safety of Canadians is being threatened.

Ottawa needs to take action to improve the way alerts are being transmitted.

1 thought on “Public Safety is leaving the public unsafe”