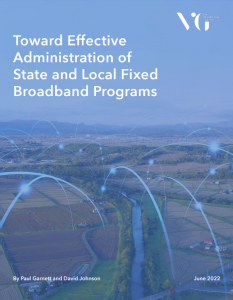 A recent report from the Vernonburg Group is intended to help various levels of governments develop more effective and comprehensive broadband strategies.

Last month, Boston College law professor Daniel Lyons observed that in 2010, the FCC estimated it would cost $24B to make broadband available to all Americans. Between 2009 and 2017, the US government invested $50B to do just that, but the FCC estimates that 14.5M Americans still lack access/ Under its infrastructure bill, the US is about to spend another $65B on broadband.

As Professor Lyons writes, “it is vital to understand how those earlier billions were spent and why we have not yet closed the digital divide.”

Toward Effective Administration of State and Local Fixed Broadband Programs [pdf, 3.1MB] “is designed to help governments and community-based organizations think holistically about how broadband availability and adoption initiatives can complement and further other public policy priorities.”

The report includes themes that may sound familiar to my readers.

However, this report notes that achieving universal high-speed internet use by all citizens isn’t just a question of providing faster connections. It also involves making sure people can afford the fixed broadband services made available to them, have devices that enable them to productively work and learn online, and have the skills, comfort, and motivation to navigate and leverage online content and services.

Interestingly, available data shows that the so-called “broadband adoption gap” is far greater than the broadband availability gap. While the availability gap is closing, the adoption gap persists. Non-adoption appears strongly linked to certain demographic variables, such as income, age, disability, education level, rurality, and some ethnic distinctions—factors that state and local governments can effectively address.

The Vernonburg report says “closing the broadband adoption gap may be more challenging for state, municipal, and local governments than closing the broadband availability gap. Even if fixed broadband was made available to the entire U.S. population for little or no cost, state and local governments and their partners would need to overcome demographic and other factors that hinder some citizens from using the internet.”

The findings presented by the report mirror findings emerging from Canadian programs. Adoption isn’t just a matter of overcoming the affordability of broadband services, but also need to address access to devices, and address issues like the “relevance of content, illiteracy, concerns over safety and security of internet use, lack of so-called “digital skills” or knowing how to work devices and apps, lack of trust in private and public low- and no-cost programs, and misunderstandings about such programs.’

The 68-page report is a must-read for those involved in development of government broadband policy.