Is Canada’s approach to spectrum policy driving up the costs of wireless services?

In the wake of the record breaking $8.9B raised in Canada’s 3.5 GHz spectrum auction, The Globe and Mail is reporting that some observers blame a scarcity of 5G airwaves, coupled with an exceptionally large proportion set-aside for new entrants, for driving up bidding by the major carriers. 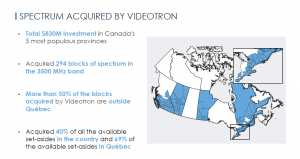 At $0.918/MHz-pop, the set-aside spectrum sold for an enormous 71% discount, compared to the $3.188/MHz-pop paid by the incumbents ($3.38 Rogers, $3.35 TELUS, and $3.05 Bell). The biggest beneficiary of the set-aside was Videotron, spending $830M to acquire spectrum in Canada’s 5 most populous provinces. According to a Videotron presentation, Videotron “acquired 40% of all the available set-asides in the country and 69% of the available set-asides in Québec.” Applying incumbent prices, Videotron would have paid $2.05B more.

“5G spectrum auctions around the world confirm that international carriers pay much less for this resource than their Canadian counterparts,” Darren Entwistle told analysts on a call Friday.

“Canada’s position as a global network leader is being undermined by burdensome regulations governing access to spectrum and its cost.”

An article by Alexandra Posadzki in the Globe and Mail indicated that TELUS wasn’t alone in questioning Canada’s spectrum policy and auction rules. “Bell, TELUS blame Ottawa’s auction rules for driving up prices of 5G airwaves”

Over the past few years, I have written frequently on the issue of spectrum policy. Here are 5 of the more recent ones:

Recently, GSMA has warned Canada “there are clear trade-offs that the government needs to recognise when formulating spectrum policy – in particular, the likely impact this could have on network operators’ ability to invest and on the consumer experience and the economy more broadly.”

As I have written before, a GSMA study recommended:

Point 3: “Artificially limiting the supply of spectrum, including through set-asides, risks slowing services and inflating prices.”

TELUS CEO Darren Entwistle is quoted saying, “If we are going to accelerate the government’s innovation and affordability agendas, and if we are going to transition successfully into a 5G world, we need a responsible, forward-looking and predictable regulatory policy that ensures expeditious, fair and economical access to this national asset.”

With $8.9B raised, should Canadian policy makers consider the 3500 MHz auction to have been a success?

How can Canada’s policymakers enable more timely, fair and effective spectrum licensing to benefit all stakeholders, including consumers?