How did the CRTC find itself in the position of funding the person generating the kind of speech in this tweet? 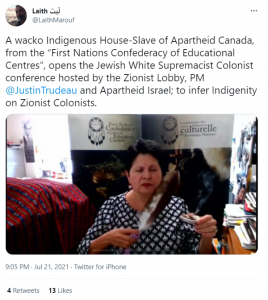 You might be surprised to learn the CRTC ordered nearly $13,000 to be paid to the author of this clearly hurtful, if not outright hateful, tweet. [Update: As of July 29, Twitter suspended his account for violating its rules against hateful conduct.]

How did this happen? Two years ago, Bell Canada proposed using $125,000 remaining in its deferral account to defray the costs of interveners participating in CRTC regulatory proceedings to make regulations under the Accessible Canada Act. The CRTC agreed.

Two months ago, on May 13, the CRTC issued a series of decisions awarding funds to a number of groups:

How could the CRTC have missed the context of ordering payment for his participation in a regulatory proceeding?

There is a clue in the third paragraph of each of the Telecom Orders listed above:

Keep in mind that deferral account funds were ear-marked for a public purpose, so one might ask if it was appropriate for the CRTC to use a standard of “what Bell asked for”. Indeed, the standard appears to have been “what Bell didn’t explicitly ask for”.

Unlike most cost award processes, the CRTC chose to short circuit the reply phase to the applications and as a result, it did not have the benefit of public input to help inform the process by which the Commission reached its conclusions. Paragraph 6 states: “CMAC submitted that it is a non-profit organization that represents the interests of people with disabilities who are Indigenous or racialized, or who identify as women, and that offers advocacy and support to these groups.” Would that submission hold up under further scrutiny?

With input, the CRTC might have reconsidered its determination in Paragraph 12 that “CMAC has demonstrated that it meets the first criterion by representing people with disabilities who are Indigenous or racialized, or who identify as women, and by elaborating on its membership and expertise.”

The cost awards in May used up about half of the funding set aside from the deferral account. The CRTC may want to reconsider its processes for any further distributions.