For the past couple years, I have frequently referred to the tension between the government’s telecom policy objectives, balancing quality, coverage and price. Think of it as a three legged stool. All three legs – Quality, Coverage, and Price – must be maintained in some form of balance to achieve stability in the marketplace.

Last September, in “Yes, it’s time to reboot Canada’s digital agenda”, I wrote that Cabinet’s determination in its review of the CRTC’s August 2019 Wholesale Internet rates was consistent with its stated policy priorities when it expressed concern “that these rates may undermine investment in high-quality networks, particularly in rural and remote areas.” I wrote:

as should be evident to most Canadians over the past 6 months, the pandemic has helped elevate awareness in the importance of Quality and Coverage, the other two legs of the Minister’s priorities. The government called for improving the balance to preserve incentives for investment, the key input to ensure Canadians have access to world leading network quality, covering urban and rural areas.

Cabinet was right to be concerned.

Last August, I prepared a bried tutorial on “The economics of broadband expansion”. There exists a boundary that defines the digital divide: where the total expected revenues from wholesale and retail services are unable to support traditional investment in infrastructure. On one side of the boundary, usually the more urban side, the private sector can line up investors willing to support broadband expansion. On the other side of the boundary, the more rural side, a different approach is required. The households on the other side of the line are candidates for government rural subsidy programs.

What happens if wholesale rates are lowered by a regulatory decision? The total expected revenues for the project logically drop and the result is that more homes end up on the wrong side of the digital divide. More homes are left having to wait for government rural broadband funding; total government funding would have to increase.

Cabinet understood this logical progression. Cabinet told the industry – and the regulator – “Incentives for ongoing investment, particularly to foster enhanced connectivity for those who are unserved or underserved, are a critical objective of the overall policies governing telecommunications, including these wholesale rates.” 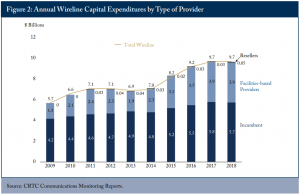 As we saw in the C.D. Howe communique last week, “the federal government must provide facilities-based providers will a clear and predictable regulatory framework that coherently balances vigorous price competition with incentives for ongoing investment to improve network and service quality.”

CRTC figures show that the major facilities-based carriers in Canada invest nearly $10B per year in wireline capital, contrasted with just $50M (0.5%) invested by the wholesale services based ISPs.

Simply put, extending the reach of broadband networks (the Coverage leg) requires massive levels of investment, as does the need to maintain Canada’s leadership in the Quality of our networks (Canada’s wireless and wireline networks are consistently rated among the world’s fastest). Government rural broadband funds are simply unable to replicate the investment capacity of the private sector.

The Court appeals looked at very narrow issues of law and jurisdiction, as stated by the Court at paragraph 23:

[23] Significantly, neither section 62 nor subsection 12(1) circumscribe the types of questions that may be raised before the CRTC or the Governor in Council. This stands in contradistinction to the prescription in subsection 64(1) that limits this Court to reviewing questions of law or jurisdiction.

For that reason, no one should expect the Courts’ rulings to be harbingers of the outcome of the CRTC’s review of wholesale rates. The CRTC’s scope is much more broad than that undertaken by the Courts, and must carefully consider the policy considerations set out by Cabinet and the legislative framework under which it operates. The message from Cabinet was very clear: “Canada’s future depends on connectivity.”

If Canada’s future depends on connectivity, the corollary is certainly that Canada’s connectivity future depends on billions of dollars of continued private sector investment. We can expect CRTC to keep this in focus in how it makes determinations in both of the key proceedings under review at this time: wireless services and wholesale internet rates.