As a kid, I never really liked the last week of August. The end of August meant the end of summer vacation, long drives back from family visits to the East Coast, teary goodbyes.

The start of school seemed to always include an assignment to write down what we did on our summer vacations.

Well, here we are.

It’s the last week before Labour Day. I have a lot to write about for that first school assignment.

Despite the crazy mess at Toronto’s airport, I managed to have extended visits with my kids and grandkids from far and farther, and that certainly tops my list of accomplishments. Despite the frequent video chats between live visits, there really is nothing like sitting together quietly on a dock fishing, or spoiling the little ones with visits to the bakery for rainbow bagels, or excursions by boat for ice cream.

Everything else this summer takes a distant back seat to the joy of quality in-person time together after a 3 year absence.

Still, I got an awful lot done, most of which found its way into earlier blog posts and some has been amplified in the general press.

There are various calls for an inquiry into the Anti-Racism Action Program and how it came to fund an organization so intertwined with a consultant with a pattern of “antisemitic comments” characterized as “reprehensible and vile.”

There are longer term issues to be explored that are related to this incident. As I indicated last week, The CRTC and its Broadcast Participation Fund shovelled more than half a million dollars to CMAC over the past 6 years. We have not yet seen the 2022 report to learn what was claimed and awarded in the past 12 months.

The CRTC might want to revisit the appropriateness of not allowing public comment on some of its cost awards, comment that may have challenged the appropriateness of the CRTC’s generous $225 per hour funding. It seems certain that the CRTC and the Broadcast Participation Fund will need to take a closer look at the public interest groups who are recipients of cost awards to ensure Canadians are comfortable with how public money is being distributed. 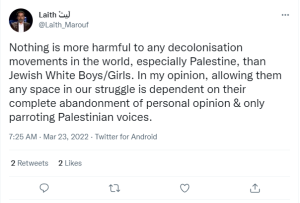 But in my view, the biggest impact will be the complete loss of credibility for Canadian Heritage to attempt to introduce regulation of online harms. A Liberal Member of Parliament made Ministers in the department aware of the potentially embarrassing contract last month – in mid-July. Nothing was done for more than a month about what the Minister now calls “antisemitic and xenophobic statements”. A department that couldn’t react in a timely way to “reprehensible and vile” statements made on a single platform (Twitter) by one of their own paid consultants has little credibility to introduce legislation seeking regulatory oversight of all online content in Canada.

Just a few weeks before the Minister was quoted in a press release with him, Laith Marouf tweeted, “Nothing is more harmful to any decolonisation movements [sic] in the world, especially Palestine, than Jewish White Boys/Girls. In my opinion, allowing them any space in our struggle is dependent on their complete abandonment of personal opinion & only parroting Palestinian voices.”

If only the Minister’s communications staff had access to a Google search bar.

The online harms bill is effectively dead. But, don’t blame Laith Marouf. This key piece of the Liberal Government’s digital plan was a victim of indifference and inaction in the department responsible for the impugned Anti-Racism Action Program.

No one could use the language, express the contempt and rage on Twitter about any other so-called “marginalized” group with even one-tenth of the ferocity that Marouf used in reference to “Zionists,” as he did for years, with reference to Jews and Israel, and not be called out, shamed and, yes, cancelled.

My point: Slander, insults and actual hate against Jews gets a pass — until some truly extreme example calls attention to it. Try referencing any “marginalized” group as “bags of feces” and see how long any journalist, politician or ordinary citizen would last.

A year ago, an antisemitic outburst from a university professor was allowed to slide with barely a wrist slap. The school likely didn’t want to have the incident impact a multi-million dollar grant announced a few weeks later.

In my part of Ontario, overall it was a great summer. The long range forecast is suggesting that it should be starting to get uncomfortable for some early this fall.

And, that is what I did for my summer vacation. What did you do?

1 thought on “My summer vacation”