It is reproduced here with the permission of the author:

Price decline shows Canadian wireless on the right track
Recent headlines have been filled with news of the rising cost of housing, food, gas, and most other consumer items. So, it may have come as a surprise to some when the Minister of Innovation, Science and Industry, Francois-Philippe Champagne, recently announced that the price of mid-level mobile wireless plans have decreased by 25% over the 21-month period ending December 2021, and that the price of larger 10GB data plans decreased between 22-26% during this same period; after having already fallen 31% in 2019 and also eliminating overage fees.

For those of us who watch the wireless industry closely, the announcement merely confirms what we already knew. The cost of mobile wireless plans has been on a steady decline while the quality-of-service and network coverage of mobile services keep getting better.

How did this happen? Did government regulate the price of wireless plans? Did they force telecom operators to allow resellers, companies that are not willing to risk investing in building their own networks, to sell network operators’ services at fixed wholesale prices? They did not. The government did what most countries have now done; it recognized that the best way to stimulate investment in connecting more Canadians with high-quality services while also reducing prices is to promote competition amongst the companies that build and operate Canada’s digital infrastructure.

By having to compete not only on price but also on quality and coverage, Canada’s national and regional wireless operators have invested over $100 billion in capital expenditures and radio frequency spectrum licenses to build, maintain, and expand some of the best performing wireless networks in the world. This is no small feat given Canada’s large land mass, low population density, high spectrum costs, and short building season. In fact, consulting firm PwC has ranked Canada as having the highest network building costs among G20 countries. It is no wonder that Canadian network operators have spent more per wireless subscriber in building their networks than their G7 country peers, and over 60% more than the OECD country average.

The impact of these investments is measurable. Canada’s wireless networks reach 97% of the Canadian population, with average download speeds that have increased 116% over the last five years; speeds which exceed those of most other countries including the United States. By investing in both wireless and wireline networks, the telecommunications industry directly contributes over $70 billion in GDP to Canada’s economy and supports nearly 600,000 jobs across industries.

But there is much more work to be done. As the COVID-19 pandemic has shown, the industry’s investments in digital infrastructure have been critical to maintaining economic and social activity. As Canadian businesses and governments continue to accelerate the digitization of their products and services, ongoing investment in expanding and enhancing our digital networks will be key to Canada’s economic recovery.

For example, Accenture has estimated that investing in the deployment of 5G wireless networks in Canada will contribute an additional $40 billion in GDP to Canada’s economy by 2026 and add up to 250,000 new full-time jobs in the same period. The increased capabilities of 5G technology will not only enable innovative new products and services and help bring connectivity to underserved communities, it will also help Canada reach its greenhouse gas reduction objectives. Accenture has estimated that the use of 5G and other mobile technologies have the potential to address 23% of Canada’s total 2030 emission reduction target by 2025.

Canada’s future depends on connectivity. But it can only achieve these results by ensuring that policies and regulations continue to encourage investment in digital infrastructure. Accenture estimates that the initial roll-out of 5G will require $26 billion in capital expenditures by 2026, plus billions more in acquiring radiofrequency spectrum rights. Achieving this high level of investment requires continued recognition by policy makers that competition among network builders, also known as facilities-based competition, is the only way to continue to deliver on the three key objectives of coverage, quality, and affordability.

Canada’s future depends on it.

Each month, Statistics Canada tracks a large number of components in creating its Consumer Price Index. I track those related to the telecommunications sector, including the cellular price index. Over the past two years, Statistics Canada’s Cellular Price Index has fallen 27.45% as can be seen in the figure below. 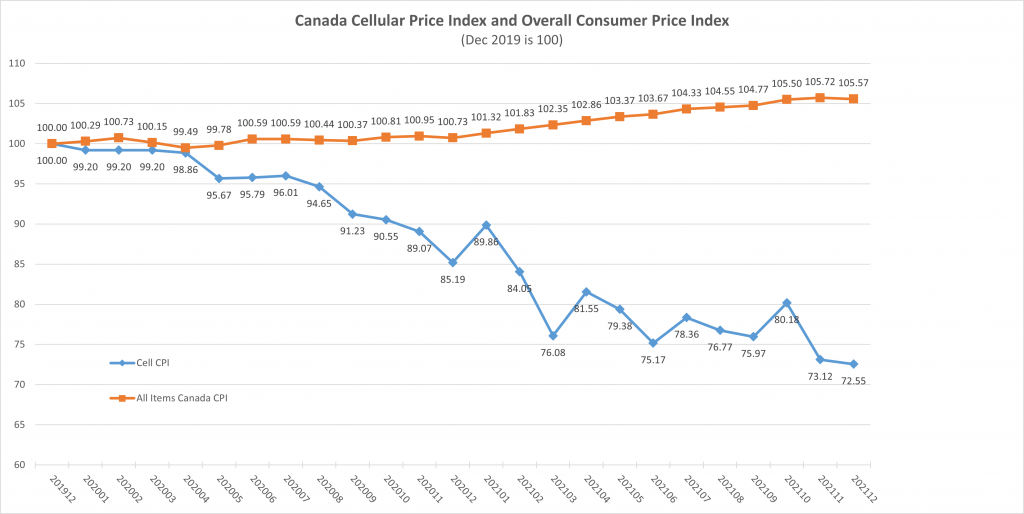