How fast is fast enough for broadband?

While there is no question that, all else being equal, faster is better, a new report from ITIF – The Information Technology and Innovation Foundation – challenges the myth that universal fibre should be on the national agenda.

All else being equal, more bandwidth is better than less, and investment that drives fiber deeper into access networks is welcome. But there is no need to radically change the competitive system that continues to expand network capacity. 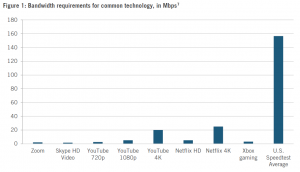 The problem is that all is isn’t equal. Most people living in large and medium sized urban markets in Canada have access to (and are subscribing to) broadband services with speeds that are already far in excess of Canada’s objective of 50 Mbps down and 10 Mbps up. In fact, Ookla is showing Canada’s national average speed in September, 2020 was 145 Mbps down and 60 Mbps up. Unfortunately, CRTC figures show that 1 in 5 rural households couldn’t even access a 10 Mbps service.

Just last week, Barb Carra, CEO of Alberta’s digital technology agency Cybera told Cartt.ca, “A goal of 50 Mbps upload/10 Mbps download is too low. You can barely run a video meeting on a 50 Mbps connection.” In fact, 50 Mbps is about 25 times the requirements for Zoom and Skype. It is double the requirements for Netflix 4K or YouTube 4K.

It is great to aspire to have universal access to even faster internet speeds. Unfortunately, universal broadband is not commercially viable without government financial support. Those government programs have budgetary limits. CRTC Chair Ian Scott recently told the ISP Summit that its latest call for funding proposals attracted “600 applications with a combined ask of more than $1.5 billion”, far outstripping the available funding.

We should be focusing efforts – and finite levels of public funding – on raising the quality of connections for those who are the most behind. A couple years ago, I wrote in “Isn’t some broadband better than nothing?”, “When some Canadians are wanting for any kind of affordable broadband, it takes a certain kind of arrogance to proclaim that 25Mbps just isn’t good enough.” It is premature to be calling for an even more aggressive target, especially since we are just beginning to allocate funds to meet the 50/10 objective.

The ITIF report shows that the vast majority of consumers in countries that have near universal access to gigabit speeds, like Singapore and South Korea, don’t subscribe to faster speeds because lower speeds are sufficient.

ITIF observes that the question of broadband speed requirements to yield societal economic benefits has been studied for years.

Research consistently shows that, as one might expect, broadband does have a positive impact on productivity and economic growth. However, the important factor needed to achieve economic growth from broadband is in reaching a critical threshold of penetration of basic broadband that’s able to perform common functions. Regression analysis of U.S. broadband data indicates that “compared to normal-speed broadband, faster broadband did not generate greater positive effects on employment.”

ITIF warns us to be wary of broadband advocates calling for universal access to fibre. “Their goal is not gigabit networks; their goal is municipally government-owned networks. They oppose corporate broadband providers on an ideological basis.”

In the wake of last week’s announcement of Canada’s Universal Broadband Fund, ITIF’s conclusion is especially applicable to Canadian policy makers and the administrators of rural subsidy programs:

We do not need to shift to government-owned infrastructure across the country to ensure broadband continues to advance and exceed current and upcoming needs. Nor should rural subsidies stipulate fiber as a necessity. Fiber can be the most cost-effective way to build a new network, but considering the great diversity of challenges facing rural connectivity, all different access technologies—fiber, fixed-wireless, upgrading copper, and satellite—should be on the table.

Fibre is a great technology, but it is not as cost effective as other technologies in certain applications. Canada’s low population densities and challenging climate and topography should lead us to consider all of the technologies available to deliver fast broadband.