A new study [pdf] from the GSMA looks at the expected economic benefit to Canada to be derived from the transition to fifth generation mobile technologies. The study sets out to “evaluate Canada’s readiness for 5G, assess the expected macroeconomic impacts from the introduction of the technology, and identify key barriers for the rollout of 5G in Canada to reach its full potential and drive future economic growth.”

“5G and economic growth: An assessment of GDP impacts in Canada” says that 5G will contribute US$150 billion in additional value add to the Canadian economy over the next 20 years. 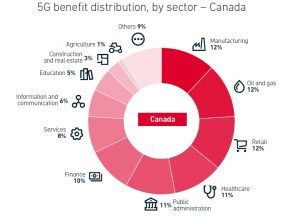 To put the number in perspective, GSMA says “the additional yearly economic activity generated by 5G in Canada will be similar in size to the value add generated by the aerospace industry every year, and will be significantly larger than the GDP contribution of many other sectors in the country.”

However, GSMA warns that policymakers and the industry need to address a number of barriers in order to obtain the full macroeconomic dividends that can be brought by 5G, including a policy environment that includes the appropriate incentives to support the level of capital investment needed for these next-generation networks.

The report highlights the new spectrum, across all bands, required by 5G operators to provide widespread coverage, and to support all potential 5G use cases. GSMA observes that by the time Canada conducts its 3.5 GHz spectrum auction, 37 other countries will have already assigned that band. Further, the International Telecommunications Union (ITU) has recommended at least 100 MHz per operator; Canada has designated just 200 MHz in total with 50 MHz set aside for ‘new’ operators.

For more than a decade, Canada’s spectrum policy has focused on set asides to promote the growth of regional mobile operators; GSMA observes “there are clear trade-offs that the government needs to recognise when formulating spectrum policy – in particular, the likely impact this could have on network operators’ ability to invest and on the consumer experience and the economy more broadly.”

GSMA contrasts Canada’s limited spectrum release with the spectrum plans by the US (360 MHz), Japan (500 MHz) and most European markets (300–400 MHz). According to GSMA, “We estimate that bringing 5G spectrum policies in Canada in line with international best practice would deliver well in excess of a total of $30 billion in additional GDP growth for the entire period 2020–2040.”

Compared to 4G networks, 5G networks will deliver 10 to 100 times faster data rates, at signal response times up to 10 smaller. These next generation networks are also required to accommodate addressing and connectivity for the massively higher density of connected devices expected in the near future.

The complete report examines the projected benefits brought by 5G to a number of key economic sectors in Canada, including agriculture, and oil & gas. It is perhaps notable that TELUS announced the launch of TELUS Agriculture, seeking to optimize food production and contribute to a better yield of food supply. A report [pdf] conducted by Accenture for CWTA also cited agriculture as a key 5G use case.

The GDP impact projected by the Accenture report [$40B by 2026] appears to be in line with the $150B figure over 20 years in the GSMA study.

The report concludes with an emphasis on the importance of getting spectrum policy right: “Countries that make sufficient spectrum available in a timely fashion will facilitate the investments needed and deliver greater benefits to consumers, businesses and the overall economy sooner.”