A little over 5 years ago, I wrote a piece that I called “Twitter is like Coffee Crisp“.

After a Twitter exchange I had this morning with Treasury Board President (and former Industry Minister) Tony Clement, that article came to mind.

I guess it started with me asking why Canada’s Anti-Spam Legislation (CASL) was exempted from the Treasury Board’s red tape reduction rules – rules that call for any new government red-tape to be offset by removing an older administrative requirement. 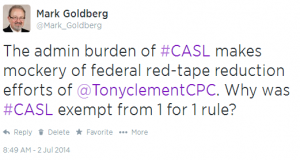 The Minister replied to this post with two different tweets:

Now, in reality, I don’t believe CASL will save anyone any money.

The “billions” to which the Minister is referring is the cost of spam and malicious electronic content. On the government’s Fight Spam website, we see a reference to “spam” as “often a source of scams, computer viruses and offensive content that takes up valuable time and increases costs for consumers, business and governments.”

The introduction of CASL doesn’t mean that we can all stop paying for anti-virus software. CASL won’t reduce the burden on IT departments to invest in countermeasures to safeguard corporate digital assets. Offensive, malicious and harmful content will continue to infect our computers and will threaten even more devices as our “things” become networked, as attendees of The 2014 Canadian Telecom Summit heard two weeks ago from a number of presenters.

CASL will not reduce the costs of safeguarding our digital property any more than 3000 year old laws against stealing have provided financial relief for the costs of insurance and security systems for my home.

So please, don’t tell me that CASL “saves SMEs billions.” I tweeted that I would love to see that economic study.

As to his other tweet that asks “where’s the red tape? You send an email asking recipients to agree to emails“, the Minister must not be aware that CASL prohibits such emails. That was why we were inundated with such requests over the past few weeks and Mr. Clement noted in one of his tweets.

So, a lot of companies got their records caught up and cleaned up and can now send email updates to folks who have explicitly opted into their mailing lists.

But the Canadian Federation of Independent Business says that only 15% of its 109,000 small business owners are aware of all the requirements and 62% of them have taken no steps to comply. So the 5 years to prepare didn’t help Canada’s existing million small businesses prepare. And Industry Canada numbers show there are an average of 100,000 new small businesses created every year. They never had the advantage of getting a CASL-free email blast to try to get explicit authorization to send emails. Just asking for permission is a violation of CASL’s rules.

I suspect that what most Canadians want is a quite different law from what we got.

I agree. But CASL goes far beyond stopping what most of us consider to be spam. CASL goes beyond “constantly send[ing] unwanted emails“. It doesn’t allow a single unwanted email. even if the content is not fraudulent, the sender is not hiding their identity, the sender observes all unsubscribe requests. [For an excellent description of CASL, let me recommend Barry Sookman’s recent CASL Unofficial FAQ blog post.]

So, I agree that our anti-spam laws should be targeting those who have a business model to constantly send unwanted emails. I also have zero sympathy for them. But it is interesting that the politicians gave themselves an exemption from CASL. Was it a matter of them recognizing the burden of the law? Is there a reason why members of parliament are allowed to have a business model that permits them to “constantly send unwanted emails”?

As I replied to Mr. Clement, this talking point (which I have seen before on Twitter) loses its credibility when spoken by people who are exempted from conforming with the law.

Mr. Clement claims that “35 million consumers disagree with [me].” I doubt it. But I would like to hear from both sides of this debate.

Mr. Clement, as a former Industry Minister, is very familiar with this file. As he noted, the law was passed by Parliament. But, I am left wondering if we Canadians are stuck with digital policies that can fit into 140-character tweets.

Yes, spam and harmful electronic messages cost billions to the economy. But let’s be clear: CASL is not going to remove those costs and “save SMEs billions.” Yes, we should try to protect Canadians from constant unwanted emails. But CASL over-reaches beyond that objective.

On the Industry Canada Fight Spam website, we see noble objectives for CASL:

The general purpose of Canada’s Anti-spam Legislation (CASL) is to encourage the growth of electronic commerce by ensuring confidence and trust in the online marketplace. To do so, the Act prohibits damaging and deceptive spam, spyware, malicious code, botnets, and other related network threats.

I agree with these objectives completely. But we all need to ask: “How did we stray so far?” What we have implemented will not encourage the growth of electronic commerce. It prohibits new businesses in your neighbourhood from announcing their presence electronically, even though such an announcement is completely legal in print form.

CASL censors communications in digital form that are otherwise completely legal. That should concern us all.

How did our members of Parliament lose sight of these objectives when framing the legislation?

As I wrote 5 years ago, Twitter is my Coffee Crisp. It makes a nice light snack, but we still need the main course enabled by this lengthier blog post – much lengthier, in this particular case.

I look forward to your comments.