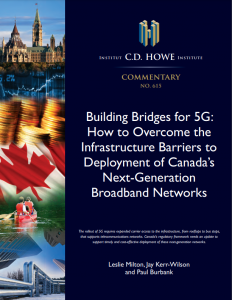 Are there policy and legislative changes that can help accelerate investment in next generation broadband networks?

Yes, according to a new report released last week by the CD Howe Institute. “Building Bridges for 5G: How to Overcome the Infrastructure Barriers to Deployment of Canada’s Next-Generation Broadband Networks” [pdf, 650KB] says, “The rollout of 5G requires expanded carrier access to the passive infrastructure”, from rooftops to bus stops and rights of way, that supports wireline and wireless telecommunications network facilities. “Canada’s regulatory framework needs an update to support timely and cost-effective deployment of these next-generation networks.”

The report was authored by Leslie Milton, Jay Kerr-Wilson, and Paul Burbank, all lawyers at Faskens with extensive experience in communications and competition law.

According to the report’s authors, the current regime for carrier access to passive infrastructure “is in need of serious amendment.”

There are seven key recommendations in the report:

Some of these echo themes that I have discussed previously on these pages, including the discussion I had last week in “Building broadband better”.

Although Canada’s regulatory regime established exclusive federal jurisdiction for the regulation of telecommunications, there are “a number of amendments to the Telecommunications Act and ISED policy that would address the material gaps and mitigate the unnecessary uncertainty caused by the current legislative and regulatory framework”.

For example, the CRTC lacks authority to address access to railway rights-of-way, bridges and crossings, and the Commission has only been able to use indirect access to regulate competitive access to multi-tenant buildings and subdivisions. The CRTC determined that wireless facilities are not covered by the carrier access rights in the Telecommunications Act, and courts have held that the CRTC does not regulate access to electric utilities’ poles and conduits.

In addition, the approval processes for antenna sites can be painfully slow for service providers seeking to improve the quality of service to an area.

Governments at all levels are investing billions of dollars to accelerate investment in broadband infrastructure in underserved areas. As we see in the CD Howe report, some significant impediments to investment can be fixed with legislative modernization, ensuring carriers are able to secure timely and affordable access to rights-of-way and passive infrastructure for the deployment of next generation wireline and wireless network facilities.