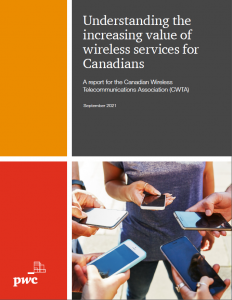 One in six Canadians would want at least $2500 per month to give up access to their wireless services for an entire year.

That’s just one of the findings in a report [pdf, 805KB] released earlier today by PwC and the Canadian Wireless Telecommunications Association.

This report assesses the value that Canadians receive from their wireless services, through considering:

Finally, this report considers the additional value that Canadians should expect to receive from wireless services, as Canada begins to deploy and adopt 5G network technology.

According to the report, the value received from wireless services is due to a combination of innovations across hardware, software, and connectivity. “While device quality has improved and new applications have helped consumers in many aspects of their lives, wireless network providers have enabled these innovations by continuously investing in advanced wireless networks with faster speeds and lower latency, and offering this connectivity at decreasing prices per gigabyte (GB) of data used.”

The report concludes with a section that discusses how “Canadians benefit from some of the best quality wireless networks globally”, despite the fact “that Canadian wireless service providers face the highest costs to build networks among the peer countries, explained by three key factors: low population density, high spectrum costs and smaller scale Mobile Network Operators (MNOs).”

As 5G networks are built across the country, and the readiness and adoption of new and innovative use cases continues to expand, Canadians are poised to receive increased value from their wireless services. This paper has demonstrated that consumers today receive significant consumer surplus as a result of 4G network innovations, many of which could not have been predicted 10-15 years ago. Similarly, consumers can expect 5G to do the same. Not only will consumers gain additional surplus from new technology innovations, they will also experience broad societal benefits such as job creation, access to healthcare and positive environmental change.