I saw a story on CNBC that talked about rising cell phone bills in the United States and that kicked off a morning of doing a little research. Citing government data, the story said that the Consumer Price Index of telephone services has increased 7% in the United States since January 2019. 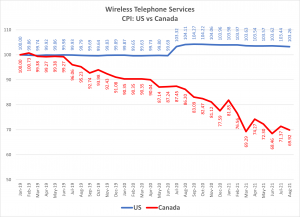 I took a look at the comparable data and found that Canada’s telephone services index has actually fallen 23% in that period.

And that made me wonder about mobile services.

Well, it turns out that prices in the US have been rising modestly, up a little over 3% since January 2019, according to CPI data from the US Bureau of Labor Statistics.

It is an entirely different story in Canada, where the cellular services component of the CPI from Statistics Canada has fallen a little more than 30% in the same period.

It merits repeating. Over the past 32 months, the Wireless Services CPI rose 3% in the US versus going down 30% in Canada, according to current Consumer Price Index data from the official government statistics agencies.

It was just something that made me say “hmmm”.